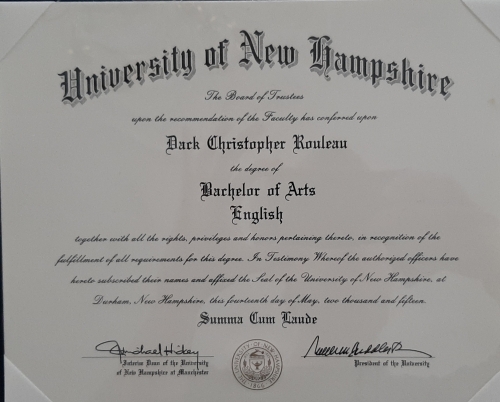 Good morning, Professor. During my last visit, you requested the link to my website, which I’ve included in this message. I appreciate your interest, but I confess I am much more deeply disappointed by your declining to respond to the email I sent you and your colleagues in April. I was surprised, and more than a little sad, that you did not even remember it, nor did you recall the golden rope that I left in your mailbox. To refresh your memory, you presented the golden rope to me at the honors convocation, staged a few days before my college graduation. The rope symbolized the program award, presented to the graduate who best represents the enthusiasm, integrity, and values sought within the field of study; in this case, the English program.

When you told me in the spring of 2015 that you and your colleagues unanimously selected me to receive this honor, I thought very carefully about whether to accept it. I knew my love of literature was unsurpassed, and I knew I had worked very hard on every commentary and essay I wrote for each of you, not to mention the many hours I spent discussing the philosophy of education with Professor P—, but I could not justify my academic cowardice. Not once in my two years under your tutelage was I courageous enough to voice my dread, dread for what I saw happening around me. I was too scared to tell Professor W— that her students were learning nothing in her class, I was too pusillanimous to tell P— that his approach to African literature was downright intolerant, and I was too intimidated to tell you how shameful it was, your reduction of Shakespeare to third-wave feminist theory.

In every classroom, I watched in horror as my classmates, oblivious twenty-somethings who were scarcely capable of looking up from their cell phones, mortgaged their futures to attend politicized lectures fraudulently presented as literary education. They never received a grounding in classical literature—they couldn’t, not when you and your colleagues freely admitted you had not received such a grounding, either—and they were not trained in formal political theory, learning only of the corporate liberalism championed by you and your colleagues. Their education was useless, which raised the question: why were they paying $12,000 a year to receive it? I can’t comment on any of the other disciplines at the University of New Hampshire-Manchester, but the English department was a betrayal of all that academia is supposed to be.

Alas, I couldn’t express any of this to you, concerned as I was that I would be punished with lower grades. I don’t wish to speak ill of P—, who is now dead and therefore unable to defend himself, but he marked me down on several occasions, simply for criticizing the novels he assigned to the class; accordingly, I had every reason to suspect that the consequences for challenging him, or you, would be much more serious. The closest I came to institutional defiance was in writing a letter to the dean, pleading with him not to hire Seth Abramson, whose literary ignorance and intellectual laziness were unmistakable: his teaching demonstration, required as part of his job interview, was an embarrassing failure, and my subsequent discussion with him confirmed my fear that he would degrade the university even further. We should note that Abramson was applying for the position formerly held by Professor Brown, the only English professor at UNH-M with serious experience in classical literature.

The dean never responded to that letter. Neither did you, except to scowl at me when I said I was doubtful a worthy successor to Brown would come along. On the extraordinary occasions that I’ve dared to disagree with you, you have always responded swiftly, with contempt, as if to inform me that my opinion is welcome only if it mirrors yours. No doubt, that is why I wrote about sexism in sixteenth-century England for my capstone essay, even though I knew the arguments I crafted were incredibly weak, and the evidence presented to support them even weaker: I knew that, on the off-chance you recognized these flaws, you would happily overlook them, eager as you were to accept anything that bolsters your preferred ideology of bourgeois feminism. In knowledge of my guilt, how could I possibly accept the program award?

I did accept it, though, and I felt filthy about it. I felt like a prostitute, for I had submitted to your anti-scholastic tyranny simply to receive a pat on the head and a golden rope. This guilt weighed on me after my graduation ceremony, and in the two years following. During that time, I came to see that my moral and intellectual failings far exceeded my gutless subservience at UNH-M, and I was so disgusted with myself for so many reasons that I finally decided to kill myself. My crude obeisance to you and the institution was not my primary motivation, but it was certainly a factor, in part because the diploma framed on my desk makes me nauseous every time I see it.

It’s been more than two years since I tried to kill myself, and more than four years since I graduated from college, but I continued to visit P— quite frequently until about six months before he died. Our conversations had become increasingly heated and strained through the years, in part because I refused to halt my pointed criticism of Seth Abramson and his quixotic quest for celebrity status. As you are already aware, Abramson has become a C-list public pseudointellectual, penning fiction and conspiracy theories presented as rigorous investigative journalism. He produces agitprop for a confused liberal audience, and not unlike Debbie Wasserman Schultz, he has assiduously refused to apologize, now that his hoax has been exposed.

In Abramson’s case, the hoax was Proof of Collusion, his massive collection of gossip that sought to demonstrate Trump’s treasonous coordination with the Russian government. His claptrap was conclusively debunked by Robert Mueller in March, but much like Schultz, and even much like Trump, he defends his lie in the face of fatal contrary proof. In fact, less than a month after Mueller delivered what should have been a career-ending blow, Abramson sat down with Bill Maher and doubled down on his dishonesty. At the end of their disorienting exchange, Maher mocked Julian Assange, who had been arrested in London just a few days before, and suggested that Abramson could take over where Assange had “gone bad”.

I will never forget that smug smirk on Abramson’s face, nor will I forgive him for daring to accept such undeserved praise. Julian Assange is a martyr for intellectual freedom and political volition. He has been imprisoned, in one form or another, for more than a decade, and he has been subjected to psychological torture that none of us can ever imagine. Seth Abramson is a publicity whore, a prostitute to the Democratic Party, a pseudointellectual, a narcissist, a fraud, a liar, and a carnival barker who pigs out at the expense of people with far more integrity than he could ever possess. It is blasphemous to compare him to a beautiful spirit like Julian Assange, and it is with the greatest self-restraint that I do not describe the repulsive moral crime that Abramson has committed. I am speaking, of course, of his insistence that Assange conspired with the Russian government, an act of slander that has been used, time and time again, to justify Assange’s torture.

Assange’s blood is on Abramson’s hands, and this ought to be enough for the university to tear up Abramson’s contract. I understood this in April, which is why, shortly thereafter, I returned the golden rope and disavowed the program award: I will not accept honors from a university whose values are incompatible with mine. I no longer mention the program award on my website, and I have never said with pride that I attended the institution. I informed you of all of this in an email that I wrote in the spring, an email that I addressed to the dean but sent to you, Walsh, and even Abramson, an email to which I have yet to receive a response.

To be clear, I do not expect you to join me in criticizing one of your colleagues. However, I cannot understand why you did not reach out to me when I said I was ashamed to have been a student of the university. What does your silence say about your supposed respect for my academic work? Is my subsequent disavowal of no concern to you? Am I right to suspect that you never really valued or respected my work at all, and that you praised me only because I wrote what you wished to read, because I was doing as I was told? Did you appreciate my obedience, rather than me? And does this prove that my opinion really was welcome only when it mirrored yours?

During my last visit, and I do believe it will be my last, you clamed you did not receive the email I just mentioned, but at the end of the visit, you admitted that you did, and that you found the golden rope, although you couldn’t remember what you had done with it. It must not have been important enough for you to commit it to memory, likewise with my email. I do not want to be a boor and force people to do what they don’t want to do, so I won’t demand any kind of response to or acknowledgment of this message, either. All I will do is say that I intend to burn my diploma later this week, to finally divest myself of all corrosive bonds to the University of New Hampshire-Manchester. To quote a graphic novel that Abramson is teaching in his current class: “I no longer wish to look at dead things.” 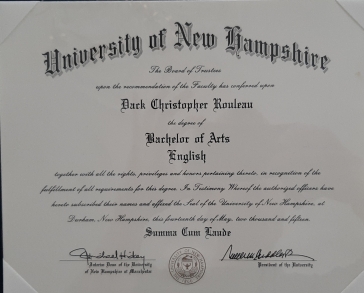 One thought on “An Open Letter to My Former College Professor re: Julian Assange”