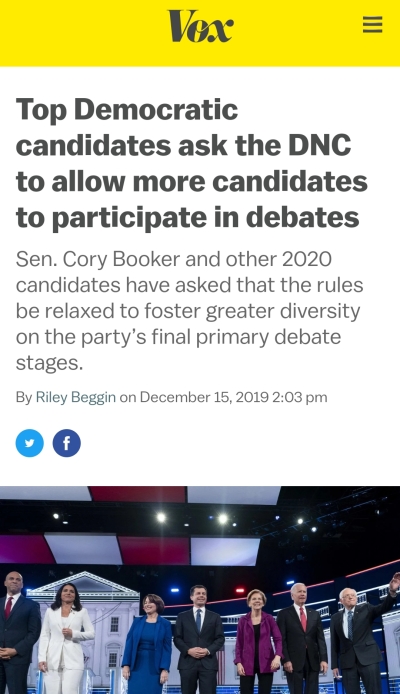 Contrary to popular (and comforting) belief, the American corporate media hasn’t succumbed to propagandistic influence and forsaken its objectivity in the Trumpish Age. Merely, it has peddled a cruder and coarser blend of propaganda than it preferred formerly: the modern concoction, while probably safer than its predecessor for its strikingly blatant toxicity, has proven to be too bland for those of us who still remember our taste. The good news (and the unsettling precedent set) for the mountebanks of misinformation is that a sizeable portion of the public cannot think for themselves, and in their intellectual dependence, they surrender all too willingly to the compulsive flow of the mainstream.

Somewhere in the shallowest swamps of the cesspool, we will find the belligerent gatekeepers of Vox, a marketing company that decided only recently to masquerade as a progressive thinktank. It presents cursory, sophomoric blogging as if it were principled, scholarly research, but not even the slick production values and cultural omnipresence can conceal the oppressive corporate influence; or, perhaps more accurately, the authoritarian corporate control. Vox, which should not be mistaken for the exceptional satirist of the same name, is the public relations arm of the neoliberal lobby, a pseudointellectual symposium presented as a populist (and progressive) publication.

I have written about this corrupted organization before, identifying Aaron Rupar as a prostitute for the Democratic National Committee. For those outside the know, Rupar reassured his slow-witted readers that there was nothing suspicious, nothing even slightly puzzling at all, behind the DNC’s restrictive mechanisms whereby multiple presidential candidates, including those of incontestable cultural relevance, were excluded from several televised debates. He insisted that the criteria were beyond reproach, and he sullied Tulsi Gabbard, a Polynesian veteran and congresswoman, for her audacious suggestion that perhaps the field had been slightly tilted.

Well, fast-forward from the dog days of August to the Christmas holiday, and Vox has instructed one of its staff to explain why, this time around, the DNC’s criteria whereby candidates appear in televised debates are demonstrably unjust—not because the criteria exclude Gabbard, but because the criteria reserve no space for Cory Booker. Yes, boys and girls, you understood what you read: the executives at Vox argue—in earnest—that the DNC has overstepped its boundaries, not by its unpatriotic disrespect of Gabbard, not by its impractical hostility to Marianne Williamson, nor by its documented conspiracy against Bernie Sanders, but by its refusal to accommodate Senator Cory Booker in one of its many televised debates.

For those outside the know, the next televised debate was open only to presidential contenders who had reached an arbitrary polling threshold and who had received a certain number of “donations” in the amount of one dollar or more. Booker might have received enough cash assistance, but he flopped on (literally) every “qualifying poll”, and so, the DNC, despite its undeniable affection for Booker’s submission to the sponsorship of Big Pharma, was regretfully unable to allow him to be seen before a national audience—or, perhaps, a national audience affluent enough to believe their wealth is real, and gullible enough to believe their financial comfort has something to do with one of the polished mascots onstage.

Not at all unwisely, Vox didn’t instruct Rupar to condemn the formula that sunk Booker, but instead tasked Riley Beggin, another establishment mouthpiece whose wrongdoings I have examined before, with inspiring the collective outrage of the people. The obvious, awkward question—“Why should we the people demand justice for a man who represents our systemic injustice?”—is hidden and obscured beneath Beggin’s appeal for racial diversity, even as she does not demand anything in the way of intellectual or ideological diversity. Without mentioning even one of Booker’s many financial entanglements, Beggin implies that he is morally trustworthy, that he can be counted on to defend and promote an undefined morality, all because he is a man of color. In the introduction to this essay, we touched upon the crudity of corporate propaganda in the Trumpish Age, and I can think of no greater evidence than this, this claim that Booker, whose political ideology is indistinct from Biden’s, possesses greater virtuous integrity than Biden, for no reason other than the color of his skin.

Is this what Chris Hedges had in mind when he described the penchant of the oligarchy to dispatch a Mobuto, a scarecrow who provides a visceral pacifier to the social justice warriors? I am neither the first nor the brightest writer to remark on Obama’s disservice to the progressive cause, but the criticism may be worth repeating here: because he appeared to represent (if not to understand) the strife and struggles of the disadvantaged and disenfranchised, it was assumed that he always acted with the best interests of the struggling in mind, even if he did not practically improve their lot. In consideration of nothing (save, of course, for his mixed heritage), the progressives granted Obama the benefit of the doubt, even after all of the relevant evidence had been recorded, and this lenience they have extended to every member of the Democratic Party—on the one condition that the party member toe the party line, of course.

Gabbard has refused to toe the party line. She has raised provocative and sobering questions about how the so-called progressives plan to pay for their ambitious social programs without trimming the budget of the Department of Defense, and in doing so, she has exposed the impracticality and the insincerity of her competitors for the party crown. This is why the DNC went out of its way to set unreasonable standards for her to appear in the debates: it could not afford the risk of her taking one of her interlocutors to task and exposing her as a wolf in sheep’s clothing. The DNC had to do whatever it could to ensure that only those candidates who had benefited from the maximum media exposure—that is, the maximum positive media exposure—would have an opportunity to stand in front of the American people. So desperate is the DNC to prevent the public from questioning the intellectual, ideological, and moral integrity of the party that it will close the door on Booker, who  can be trusted to sustain the treacherous legacy of Obama and the Clintons, as long as it precludes Gabbard, Williamson, and other tolerable speakers from the proceedings.

In severing Booker from the lineup, has the DNC confirmed it will cut off its nose to spite its face? Or has the DNC, in its desperate attempt to wrangle the narrative, inadvertently chomped off more than it can chew? If the former is the case, then disgrace must be showered upon Vox for failing to explain to its readers why Booker was excluded, rather than reducing the entire process to nothing more than racist structuring—an accusation which, if proven, should inspire Americans to reject the Democratic Party forever. But if it is the latter, then Vox must be recognized as the fattiest part of the narrative, a piece so repulsive and insipid that it is incapable of doing anything but proving the tasteless culture of the DNC. And if that is the case, then let us hope that Vox, in all of its gristle, continues to demonstrate how the sausage is made, if only inadvertently.