Why does she hesitate before she kisses him? Leo was so cute before he got fat.

On December 19th, 1997, as twilight fell on the twentieth century, the American middle class—that lovely euphemism for “the bourgeoisie”—stood on the bow of their sumptuous vessel, sipped on priceless foreign spirits, and admired the abyss flowing before them. This limitless abyss, this magnum mysterium, was the inevitably prosperous future of their country: the American Empire would never diminish in reach or strength, but would and indeed could only grow. So firm was their faith in the surety and security of their ascendance—which they described as progress—that they never troubled themselves with questions about the operations of the ship on which they stood—and on which their buoyancy and momentum depended.

We won’t exhaust or immiserate ourselves by counting the baby boomers’ dumbfounding failings, but limit ourselves to their obscenely naïve and immutable confidence in the American economy’s infallibility. Even if they never wished to know why they were spoiled with riches all of their lives, surely they must have sensed it couldn’t last? Yet, my father was hardly the only American foolish enough to buy a house in 1999 with the expectation of selling it for three times’ its value in 2009. Such breathtaking ignorance of economic reality prevented him from anticipating, to say nothing of understanding, the great downward shift of the twenty-first century.

Of course, this childish superstition of insouciance betrays a mentality that is completely simplistic. The baby boomers, who have finally come to define and represent Americans generally, lack any coherent principles or values, other than their desperate desire for that which is thoughtless, bland, convenient, and garish. Only the most graceless and cloying will do, in life as well as art—hence their love of the cinema’s stentorian bombast. Within this medium of personal expression—which, for the boomers, is always emotional expression—they realized their own petty fantasies, fantasies depicting their compulsive search for the anodyne. They reached the apex of their sluggish pursuit in 1997, finding nirvana with the release of a film named Titanic.

Much like the boomers themselves, Titanic is an embodiment of indulgence and surfeit, a ponderous creature, a monster of girth. We remember this film for its size, whether it be the extraordinary running time (or length), the broad cinematographic scope (or width), or the famously bloated budget, which set a record that stood until Hollywood learned to waste the same amount of money making cartoons.

Yet, not unlike the boomers, Titanic’s social success was truly determined by its financial success: in the winter of 1997-1998, Americans could afford to buy every Beanie Baby ever assembled in a sweatshop and spend $600 million on tickets for Titanic. Have we, at any other point in history, encountered such massive buying power, or witnessed its shocking squandering? Titanic endures in the popular—meaning, collective—imagination only because millions and millions of boomers spent their money on it. So much money did they spend that Titanic became the highest-grossing film in American history, although several older films likely sold more tickets. Nevertheless, this alleged achievement would stand for twelve years, until Americans came together to spend even more money on a cartoon.

His performance in Club Dread was better.

Titanic is a cartoon, too, a simple presentation of colorful images meant to amuse the intellectually inchoate. Aldous Huxley, had he lived to behold the violent climax of the American Century, may have championed Titanic as the masterpiece of the Feelies, that degradation of the cinema whereby people do not think, but receive stupefying, overwhelming sensations. Gluttonous in its sensuality but lethally anemic on characterization, Titanic is a superficial exercise in the triumph of visceral wizardry over any pretense of a thoughtful story. It is not inherently dishonorable, as a filmmaker or as a moviegoer, to immerse oneself in the transformative magic of special effects, but to pretend that doing so allows one to connect at a meaningful level betrays one’s fear of what is being done, one’s subconscious guilt, and, ultimately, one’s fear of oneself.

Maybe the secret to Titanic’s mass appeal is the opportunity it affords the American people to flee and forget their own triviality and mental bankruptcy. Much has been written of the film’s insipid story, one which is formulaic even by the standards of a major Hollywood blockbuster, and just as much has been said of the characters, who are stereotypes of the most vulgar stock. You are likely to find more complicated, multilayered psychologies in a Disney film, or at least a less pedantic musical score. No one would have died aboard the RMS Titanic if James Cameron had been the captain, for while the White Star Line neglected to put enough lifeboats on the ship, Cameron forgot to put humans on his.

However, the baby boomers who applauded this film were surely no deeper in personality, nor were they more nuanced in their desires, than Jack and Rose, who are evidently incapable of any action other than staring into each other’s eyes and dreaming of a peaceful, forgettable future. Might this film, in its celebration of the lukewarm and the boilerplate as the ultimate ideal, be the perfect movie for the pusillanimous boomers, unaccustomed as they are to critical thinking?

Watching Titanic in 2019—and, presumably, in subsequent years—it is easy to see how it offered reassurance to the boomers. At the turn of the century, the affluent boomers were growing restless because of their unnaturally cozy lifestyles, and their insecurities gave rise to all kinds of bizarre and destructive behaviors. My mother was not the only woman who caused trouble for herself and her family to overcome her sense of malignant boredom, cheating on my father and tallying more than $30,000 in debt without a single possession to show for it. Titanic was a psychic antidote to the lust for wealth and consumerist culture, glorifying the working class as a joyous lot, especially in contrast to the pretentious, bloodless elite; however, it also confirms the bourgeoisie’s elemental superiority, as Jack all too happily kills himself for Rose. 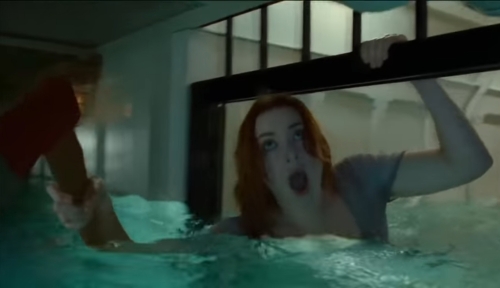 Apparently, the water temperature is only a problem outside the ship.

[Hey, you know what’s funny about that scene?]

Dude: shut the fuck up. Yes, there is space enough on the door for both of them to get on, but with their combined weight, it sinks. Do people deliberately misunderstand that scene?

[Touchy, touchy. You were saying?]

I doubt I’ve ever seen a more incoherent portrait of class than that which is presented in Titanic. Rose is supposedly a daughter of privilege who is transformed morally and psychologically by her interactions with Jack, but she loathes her aristocratic lifestyle and disdains the worship of money long before she meets him. Why, then, does Jack call her a “spoiled little brat”, as if she is somehow developing as a character? Conversely, her fiancé, who is so pervasively ugly that he might as well have been portrayed as a cockroach in a bowtie, obsessively insists on marrying her, even though she is openly resentful of his pompous lifestyle and is penniless, besides. With the pursuit of their relationship being impractical for him most of all, why is he so adamant on taking her as his bride that he is willing to pursue her with a pistol? Rose’s mother, who stands to lose what little she has left and become a seamstress if the engagement fails, would have some reason to be controlling, but not her fiancé, who, as Rose observes, moves on and marries another woman shortly thereafter.

[Hey, can you imagine Rose’s mom grabbing that gun and going berserk? Now that would’ve been a pretty solid scene.]

Titanic serves another purpose for the boomers, validating their superstitious terror of living alone. Americans have all too much to be ashamed of and to atone for, yet they can imagine no greater ignominy than to enter the grave without a wedding ring. So fanatical are these busybodies on this curious point that they will devise ridiculous mythologies as a testament to their paranoid fear of permanent bachelorhood. Rose furnishes an interesting case in point: she maintains her immutable affections for Jack for more than eighty years, even as she marries and conceives with at least one other man. This latter detail, which clearly contradicts her professed claims to never-ending love, cannot be allowed to besmirch the portrait of broad romanticism that is so important to the boomers for reasons that I still can’t understand. Their entire existence is predicated on another human being accepting them as a sexual partner, and if they don’t receive this approval, well, then anything else they do is negated.

Oh, but all of this embarrassing decadence is inevitable in morbidly luxurious cultures. When you have more wealth than you know what to do with, maladaptive practices, interests, and habits can and must develop; and considering what Jeffrey Epstein taught us about the predilections of those who are truly wealthy, maybe the neuroses of the folks who love Titanic shouldn’t be viewed out of proportion. My charge against the bourgeoisie is not their position, but their refusal to consider how they reached that position, to ask who bestows their wealth upon them. As they stretch their legs on the bow of the ship of state, they never ask themselves who is steering the ship. Sure, they have some fusty, foggy notion of a captain and a crew, but the particulars of their operation are of only slight concern. It is not until they crash against the frigid truth of their neglectful and reckless lifestyles, not until they face the threat of drowning in their own excess, that they ask questions and demand accountability—though always on someone else’s part. “We were driven to these waters against our will,” they cry, “and now we must be saved—for we can’t save ourselves!”

What do you mean?

[Do you remember when Titanic was re-released in super-special 3-D on the 100th anniversary of the sinking of the ship?]

[And you reviewed it for The Citizen of Laconia, didn’t you?]

Well, um, I wrote a lot of articles back then—for that paper, I mean . . . You can’t expect me to remember all of them, can you?

[Oh, not to worry: I retrieved a copy of your column.]

[It’s a shame I couldn’t get a clearer scan, but I can still make out my favorite portion. Let’s read your words out loud for the audience, shall we?]

You have no right—

[“Anyone who has caressed the cheek of an unlikely other can hardly help but glow when Jack teaches Rose to fly on the bow.”]

Uh, I, I couldn’t have written that! Look at the sentence structure!

[“Life is ephemeral, and the fragile brevity of human existence is peerlessly represented in this three-hour saga.”]

[And you close by noting, quote: “We may have lost a lot since 1997, but the heart still goes on.” I can only ask you, Dack: are you more embarrassed by what you wrote, or by what you thought?]

Eh, it’s the thought, I suppose. The words are just an incredibly incandescent reflection of my own psycho-intellectual failings. I was young enough, dumb enough, and inexperienced enough to think I knew something credible on the subject of life, and for the same reasons, I presumed to know a thing or two about love. It is not my impression of Titanic, but my sentimental naivete, that causes me such embarrassment now.