It is as remarkable as it is wasteful, the creativity with which we demonize our political opponents. My neighbor, who intends to vote for Andrew Yang in February of next year, and who expresses his intention by planting the candidate’s banner in his front yard, is not only an irredeemable fool, but an active and bloodstained participant in the toppling of the Bolivian state. Yet, this shameful expenditure of energy is itself surpassed by the frantic haste with which we shift this designation, depending on our momentary need. In 2012, we reassured ourselves of our liberal virtue, ours and Obama’s, by envisioning the Republican Party as a cabal of decadent billionaires; in 2020, we will convince ourselves of our enduring moral superiority, ours and the Democratic Party nominee’s, by depicting the Republicans as a mob of toothless, impoverished hicks.

We cannot stop to note the incompatibility of these political ink blots, lest we shake our confidence in the simplicity of our institutional structure. Complexity begets questions, and questions are the seeds of uncertainty—and uncertainty is anathema to politics. Indeed, one negates the other: can you imagine anything more surreal than a politician who stands before a crowd and admits that he doesn’t have all the answers, that he hasn’t exhausted every single puzzle and has devised a simple solution to all? How could be a politician ever admit to doubt; are we supposed to believe he is a human? Should such a candidate appear, he would be no politician at all, but would have more in common with the intellectual.

On Wednesday, the anti-politician emerged. As the House of Corporate Representatives convened to vote to impeach President Trump, Tulsi Gabbard refused to join the asinine assembly. Because she saw no cause to celebrate this joust’s protracted, bitter, and unsatisfying climax, she cast a lone vote of “present” so as to deny, as much as she was able, credibility to the political pageant. Alas, she couldn’t deny the victors their spoils, as the Democrats compelled obedience among their ranks sufficient to achieve impeachment. Her defiance, no less substantive for being symbolic, has been received with opportunistic applause by the Right and inevitable bloodlust by the Left.

President Trump has offered Gabbard halfhearted, insincere praise for her vote. Like many right-wing figures and commentators, Trump pretends to admire Gabbard, even though she represents everything he loathes and opposes; clearly, the neoconservative goal is to exploit her unpopularity in the Democratic Party so as to strengthen the Republican Party. They assume no risk, as Gabbard cannot overcome the Democrats’ restrictive apparatus to become the nominee, and it is only now, as this grim reality becomes increasingly clear, that they are willing to acknowledge her existence. Previously, they had to ignore her, lest the only candidate who offers a clear ideological alternative to Trump threaten his re-election. 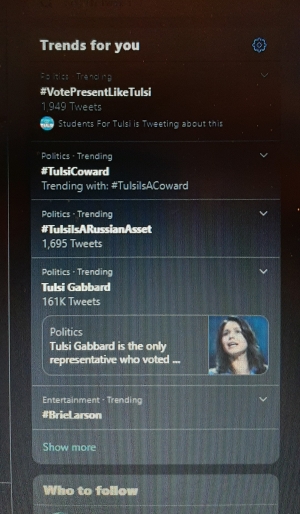 While the neoconservatives’ respect for Gabbard is plainly facetious, the neoliberals’ disdain for her is quite sincere. Because she offers such a clear ideological alternative to Trump, so, too, does she expose her intraparty rivals’ similarities to Trump. She dispels the illusion of the Democratic-Republican duopoly and simultaneously threatens the stability of the fascistic system. This is why the corporate media, whose lifeblood depends on the system’s endurance, cannot afford to cover her campaign, lest it jeopardize its own existence. Hitherto, it has acknowledged her only to remind its loyal consumers, and the loyal members of the Democratic Party, that voting for her is a waste of time because, for reasons that are never articulated, she has no chance of winning the nomination or, heaven forbid, the presidency.

The tradeoff to this strategy is that the corporate media exposes its own destructive machinery to those who pay attention. Few as they are, they can’t ignore the obscenity of the process unfolding before them. As soon as Gabbard voted “present” in an act of rather obvious protest, suddenly the media took a preternatural, conspicuous interest in her. Multiple denunciatory hashtags (including #TulsiCoward and #TulsiIsARussianAsset) made waves and reached a large audience on Twitter, just as a bevy of establishment apologists—including former Senator McCaskill and the allegedly unfiltered Emma Vigeland—condemned her as an abscess on the body politic. We won’t question the authenticity of their outrage, but we will ask them this: if Gabbard really is so irrelevant, then why do they ascribe such importance to her vote? What inspired their burst of intrigue?

Regardless of its substance, Gabbard’s vote was, in effect, a third-party vote, and nothing is more threatening to the establishment (in this case, the Democrat establishment) than a third-party vote. Voting third-party used to be a statement of pride, but Hillary Clinton has worked very hard in the last three years to villainize and ostracize those who refuse to feed the duopolistic beasts. Third-party voters were all but officially scapegoated in the prelude to the midterms of 2018, with Chelsea Handler screaming “Fuck those guys!” in a chat with Bill Maher. The corporate media, and the benighted and beguiled Americans who consume it, echo her unlettered animadversion today. 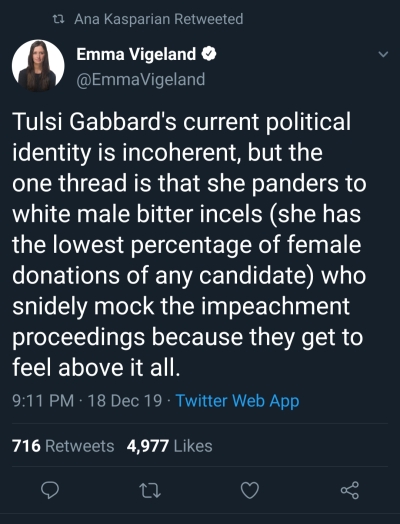 We must conclude that Gabbard is not a cynical contrarian appealing solely to the most uncivilized fringe. Any assertion to the reverse is reached in ignorance, and promoted to the end of persuading people not to think. When I interviewed Gabbard in July, I asked her why the so-called progressive media, with its relentless emphasis on diversity, had taken no notice of her, despite her fulfillment of almost every minority quota. She hasn’t enjoyed any of the categorical protections afforded to the other female and colored Democrats, nor have any of her white male contemporaries endured ad hominem attacks of such intensity. I’m not suggesting that this inconsistency is forged in racial bigotry, but I cannot forget that the same white liberals who describe this Polynesian woman as a foreign menace insisted that the birther controversy was inherently racist.

Whatever their motivation, these jockeys of public opinion want to clear Gabbard’s hurdle before she steers them off-course and brings them to stumble. Accustomed to no meaningful challenge in Washington, they are unprepared for an opponent like Gabbard, and although they have succeeded in their war against her, their freewheeling improvisation has been sloppy, even reckless. We can hope only that Gabbard maintains her presence and maintains her fight—not because we buy into political solutions, not because we believe in revolutions at the ballot box, but because we want to witness the mouthpieces tripping over their tongues.