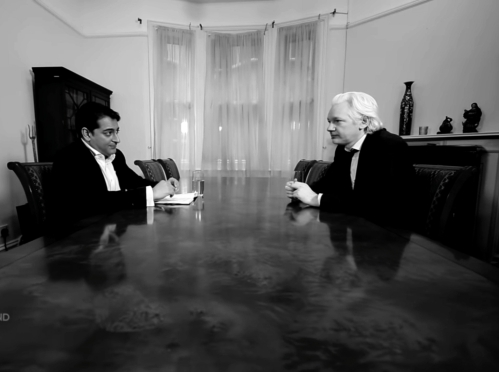 There are two major arguments or ideologies in the movements to defend Julian Assange. One is humanitarian, proposed to defend Assange from torture, unjust imprisonment, and other violations of his basic rights. It is a strong and noble stance, one that I encourage people to take and for which I applaud them when they do. The second is rooted more deeply in politics or law, predicated on objective support for the First Amendment specifically and freedom of expression generally. “We must stand up for Julian Assange, or free speech will be a thing of the past, another right sacrificed on the road to tyranny.” So we are told, and so did I believe—until very recently. Certainly, I don’t want to discourage my brothers and sisters fighting for Assange—my brothers and sisters whom I love, truly—but I can’t continue to ignore the sinister evidence piling up before me, and therefore, I say only with the greatest reluctance that the fight for the First Amendment is lost.

Let us revisit, revise, and complete the argument of law introduced above: “If Julian Assange is charged, extradited, and convicted by the United States for the act of publishing information, then the First Amendment will be effectively repealed, because the American government will have set a precedent whereby it can convict anyone for publishing any information.” A fine summary, but I would strike the words extradited and convicted at the start, and substitute charge for convict at the end. Hitherto, we have mistaken charges for conviction, and we have conflated harassment for punishment. While the outcome of the case against Assange remains unknown—for now—it is an accepted, undisputed, and disquietingly quotidian fact that the American government has charged him for the act, though not yet for the crime, of distributing information. And that, irrespective of the eventual verdict, marks the demise of the First Amendment.

On May 23rd, 2019, the United States government charged Assange with violating the Espionage Act, an antiquated law that, even by the most generous measure, would apply to American citizens only. On the same day, the United States government set an unmistakable precedent whereby any person, regardless of nationality or intent, can be charged with a crime if that person has published information that is disagreeable, problematic, or offensive to the government of the United States. This is not to say that the charges will eventually result in a conviction—we can’t predict that, as there are too many variables to quantify and consider herein. Nevertheless, every serious journalist can expect to be charged or accused of wrongdoing, pursuant to the precedent already established by the as-yet-inchoate case of Assange vs. The United States of America.

Even if I were to be assured of my eventual success in the courts, how can anybody say that I will survive up to that point? As an embarrassed member of the bourgeoisie, I am accustomed to many creature comforts and luxuries that Assange was compelled to sacrifice when he was locked up in the Ecuadorian embassy in London. Do I have the ability, do I have the strength, to withstand and tolerate, as Assange has every day for the last eight months, the protracted misery of sitting alone in a cell as my reward for informing the world of what the American government is doing? I can’t say that I do. I can’t say that, if offered a cyanide capsule by one of the guards in Belmarsh, I could resist the temptation to end my own suffering—and yet, this is a benevolent blessing, compared to the fate awaiting Assange! This is the best I can expect from the American government: an option to end my own pain prematurely!

If you are discomfited and heartsick after reading what I have written herein, then remember that you are ineffably fortunate, for you can close your browser and turn to something pleasanter if this essay is too much for you to take. Yet, Julian Assange faces a fate unfathomably grimmer than the darkest and cruelest manifestations of my imagination, and still, he cannot exit the page of horror, for the horror is his life, the price he pays for presenting the truth to a jaded and uninterested crowd. If his seizure and incarceration is inadequate to stir you from your apathy, then I must ask you one question: is mine? What if I were to be held in some monochromatic cell, without so much as one book to help me pass the time? Would me heartbroken pleas for mercy suffice to inspire you to be my public voice and hope? If not, then would your arrest, your disappearance, and your torture be the final straw for your friends and neighbors?

Allow me to make a confession, one which will expose my own stupidity: I always assumed that, as grim as the political situation became, I could always count on my own immunity because there wasn’t enough room in the prisons for a nonviolent offender like me. Unfortunately, the arrest and torment of Julian Assange confirms that the state—that malicious, untrustworthy, self-propagating state—will stop at nothing to sustain its own illusory power, the blood of the innocent be damned and exploited. Even if the state were to find itself limited in its capacity for incarceration, even if it were to exhaust its secret prisons and abandoned warehouses, even so it would find the space for a seditious insurrectionist such as me—or such as you. The state has already proven it will make such space, that it will accommodate as many of its enemies as it must—alas, the implications of this move are lost on the American people, who still struggle to fathom that their government could deceive them, never mind seize them in its fascistic grip.

The American government may not have declared war against every principled journalist, but the American government has put every journalist on notice with its abominable charges against Julian Assange. Accordingly, the only rational conclusion is that the First Amendment is, by all accounts, by all appearances, and for all purposes, effectively null and void. The First Amendment may not have been officially and formally repealed, but the Fourth Amendment wasn’t, either, and we are hardly in a better position today than we were six years ago, when Edward Snowden revealed how feeble our Constitutional protections are in the modern digital age. Snowden has never spent in a day in jail, but what sensible person would suggest the Fourth Amendment is any stronger for that? The charges against Assange are no less disconcerting, and yet, the vitality of the First Amendment endures—though only in the imagination of the desperately naïve. The First Amendment reached its terminus on May 23rd, 2019. Our task is not to save the First Amendment, but to save Assange—and he means a whole hell of a lot more than blurry words composed on a dirty piece of parchment.

One thought on “Midnight on the 1st Amendment: What’s Really at Stake in the Case Against Assange”