This was a bad time to begin a remodeling project.

The people of New Hampshire will remember Monday, the sixteenth of March, as the transcendent date of the pandemic. Nothing changed until Tuesday, the day on which gatherings in restaurants and pubs were formally abolished, but Governor Sununu’s announced decision of this abolition on the day before effected a conspicuous atmospheric shift in the Granite State. Our collective gloom, so carefully suppressed in the winter months, finally breached our miens and spread so that it may become omnipresent and undeniable. Everyone understood that something was coming, and while it would probably prove to be insignificant, it was something over which we had no control. It was the absence of agency that troubled us, even if it didn’t frighten us, exactly, and even if it prohibited some luxurious activities only: no one likes to be told what to do, especially by legal compulsion. The denial of choice was especially foreign to New Hampshirites, who pride themselves, probably undeservedly so, on the philosophy of “live free or die”, and who, by the last tone of midnight on Monday, would find themselves living unfree, and still may they die.

In my opinion, fear of the coronavirus remains respectably low in New Hampshire, but even if one doesn’t fear the disease, one is confronted relentlessly with reminders of its menace. Unlike all of the other biological bogeymen of the twenty-first century, such as Ebola or swine flu, public policy has changed considerably in response to the coronavirus. Even if your own habits and lifestyle are unaffected by the mandated closures of certain businesses, your awareness of this mandate makes the disease tangible in a way that the others were not. Surely you have walked within the grocery store and gazed upon the ravaged shelves, if only for the novelty of it all? Failing all else, you must have noticed the diminished traffic on the road, an involuntary quietude that has developed because of this illness. We don’t have the option of ignoring this episode, even if we turn off our televisions and shut down our smartphones. This time around, the panic hasn’t been brought to our door; the state has compelled us to let it in.

With the preliminary steps towards a lockdown pending, the only responsible action to take, so it seemed, was to stock up on supplies. As mentioned in the previous entry, our consumerist system does not permit comprehensive planning, for any truly effective plan must account for the end of the system itself. The best, or the worst, that one can do within these parameters is to “panic buy”, to hurriedly purchase enough supplies to last one for a couple of months, at the absolute most. This embarrassing exercise, already taken up with violent flamboyance in most of the major cities, seeks salvation through the hopeless system even while acknowledging its impending demise. While this is normally a harmless, if unnecessary, measure, the tangible terror in the midst of the coronavirus has caught like a bushfire, sweeping through shops and purging them of bash tissue, disinfectants, paper towels, and the like. Confronting a surreal shortage of supplies, the American people, who have made gluttony an art form over the years, are suddenly living in the land of not-so-plenty. If the distinctly American brand of capitalism was ever truly alive, it died on Monday afternoon when President Trump, the apostle of the free market, took to Twitter to beg Americans to restrain their spending habits and to stop buying in bulk. 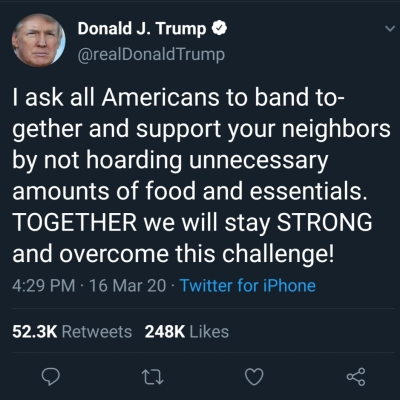 Not that there was much of anything to buy. When I arrived at the dollar store minutes after Trump tweeted his plea, all of the aforementioned items, and many unmentioned, were fully sold out. This was my first time shopping since Friday night, and the impassioned purchasing had only intensified in the seventy-two hours-minus. My initial amusement at the evidence of comical hoarding, while always complemented by a certain malaise, had now transitioned to complete disconcertion. This was not an isolated issue, pertaining to a single store in the middle of nowhere: the entire state and the entire nation were fleeing from the shockwaves of an economic breakdown. Earlier in the day, the Federal Reserve had announced yet another payment, its third in a week, of $500 billion to the stock market. Supposedly, this desperate act of monetary resuscitation halted a fatal asphyxiation of the American economy, but it did absolutely nothing to encourage and reinvigorate investment, the decline of which has been unfathomable. This, infinitely more than the coronavirus, portends the implosion of the American Empire, though this is only the most nebulous preview of the brutal damage to come.

As I waited in line to purchase laundry detergent and a box of bandages, the electronic cash register malfunctioned, thereby delaying us for several minutes. The clerk apologized to me and the rest of the other customers, to which I replied:

The clerk and a few of the people in line began to chuckle, but an elderly woman standing behind me, her back so broken down that she was practically hugging her walker, said: “People are actin’ like it is! Runnin’ around, takin’ everythin’ off the shelves . . .” Then she said to me, her dentures bared in a grin: “I think they should put pinecones where the toilet paper used to be!”

It’s a funny suggestion, but it’s also frightening. “Used to be”, implying not only that it is no longer there, but, perhaps, that it will never return. Is this the new normal? Is scarcity the order of the day, this day and tomorrow, as the American Empire finally abandons the intoxicating memory of the twentieth century and immerses itself in the irresistible reality of the twenty-first? As dusk fell on Monday the 16th and the unfamiliar restrictions of Tuesday the 17th approached, it was difficult to believe that we weren’t turning a corner, that we weren’t crossing the point of no return—which is not to say that there won’t come a time when the shelves are stocked consistently again, but that, just as we never really recovered from the crash of 2008, neither will we ever truly overcome these calamitous days.

Such was my cynical outlook as I returned home. For the moment, I was safely isolated from the hopeless foraging at the stores all over town, but I knew the day would come when I would have to venture back into the decimated marketplace again, and I could not expect the conditions to be any rosier when I finally returned. The coronavirus would pass, and perhaps it was already passing, but the days of pandemonium were only beginning.