None of these people were willing to speak to me in defense of Julian Assange, but all of them are more than happy to appear on national television and speak in defense of Joe Biden.

Democracy is anachronistic in a hyper-politicized culture. It is impossible to plea subserviently to the much-mythologized “power of the people” and the good that will come of its rapid realization without simultaneously accentuating the grotesqueries of the past—a past romanticized for its civic engagement. The reverse is true, too: Trump pledged to make America great again, suggesting—perhaps unwittingly—that America was great, once upon a time, and that, if she resumed the habits of yesteryear, then she would swiftly recover her greatness. He has been deservedly castigated for pirating that vacuous motto from Reagan, who, like Trump, appeared to pay homage to the faded glory of the 1950s. The natural conclusion is that America has been amateurish—the dictionary’s chief antonym for great—for the better part of sixty or seventy years. And because the politicians have, we are told, produced this jackleg culture—another recommendation by Merriam-Webster—then perhaps it is truly amateurish to try to vote our way out of this quagmire.

Of course, that won’t stop the Democratic Party—not to be confused with democratic theorists or any category of learned individuals—from returning to the ritual for old times’ sake. They are not yet willing to abandon the canon; hell, they have scarcely amended the script. The primary season was the longest on record, as well as the most pointlessly costly, but it ran in the same antiquated format to which we are accustomed. It even ended in the most traditional, or tastelessly predictable, conclusion that one could envision: the anointment of Joe Biden, a career politician (or a terminal politician) whom the electorate dismissed as a has-been when he last ran for president twelve years ago. Today, he is recognized almost universally as the bloodless afterbirth of an expired era, hence why the party bosses had to tilt the field until they almost flipped it, just to force Biden to tumble into the presidential nomination. The political atmosphere is so insufferably musty that an absentee ballot is considered innovative.

It won’t be counted until the night of the general election, a grim and joyless charade awaiting us at the end of the slog of the next eleven weeks. The countdown to the funereal finale commences on Friday, the twenty-first, in the groggy afterglow of the Democratic National Convention. Much like the presidential nominee, who is not really a person so much as an artifact, the convention is a creaky, shopworn model that should have been shelved some time ago. To force it to run in the time of the pandemic is patently reckless, yet the Party feigns delight as it goes through the motions and belches bronze smog in desperate performance. We hear tell of a “modernized” convention, a term the Party uses to congratulate itself for its ability to push the play button, but in substance as well as in appearance, it is indistinct from previous years. One could write an interesting, terrifying essay on the Party’s rather Sisyphean inability to escape the embalmment of the past, although one could argue that Trump did precisely that, albeit on Twitter, four years ago, and the Party learned absolutely nothing.

Thanks for the reminder.

Neither have the American electorate, whose ostensible interest in the interminable battle between Left and Right grants the convention a dignity, prestige, and relevance that it surely hasn’t earned. Only the most sluggish of learners would believe that the public’s reluctant willingness to tune in to the proceedings, if only for a moment, is proof of authentic enthusiasm, but then again, the Party wouldn’t have a convention, the Party wouldn’t be, if Americans truly wanted to learn. Ergo, we ethnographers were sentenced to four nights of this maudlin indulgence . . . but I still think it was, for us, a worthwhile educational experience, and not just because, on the second night, I found out who Tracee Ellis Ross is. No, I was very much intrigued to see two white soldiers standing behind the Samoan delegation, a rare demonstration of imperialist power of which the American Empire apparently did not approve. Perhaps this is a preview of the neo-democratic system that is to come about in the adult years of the twenty-first century, a process whereby the military authorizes the electorate’s ratification of a representative selected by armed committee. Something tells me there will be little patience, or stomach, for my bitter reflections.

On a more ominous note, perhaps this is not a vision of the future so much as an interpretation of the present, as well as an assessment of the ignominious past. Has the coronavirus pandemic forced a collision of our suppressed (and conspicuously comforting) fear of an impending dystopia with our neurotic ignorance of its active realization? As I watched the montage of the state delegations counting the votes for Biden—a ritual which, it should be observed, occurred after Bernie Sanders, who also tallied votes during the roll call, delivered a speech in support of Biden—I thought about how easily the Party could prevent the public from hearing critical voices, voices that could expose the Party’s tyranny . . . but then, I remembered that the Party has always had this power, at least in the time of television, and that it had exercised that power in previous conventions. Evidently, the nature of the convention hasn’t changed, and neither has the Party: the only one who has changed is the person who can see the machinery.

How much more mechanical can the process become before the entire electorate sees that it isn’t magic? Kerry Washington, an actress I once respected, hosted the third unsightly night, just a few weeks after Bill Maher called her “a thought-leader in this country”. Her shallow discussion with Maher had been centered around her documentary glorifying the American Civil Liberties Union (although they found time to venerate George W. Bush, as well), but now I wonder if it was really an advertisement for her appearance at the convention. Maher correctly predicted—or, more likely, was informed by Party officials—that Kamala Harris was the vice-presidential nominee, whom he praised as “a law and order prosecutor” appealing to right-wing authoritarians who appreciate what the Trump Administration is doing to protesters in Oregon. Washington voiced her admiration for Harris, as well, though she spoke even more affectionately of Susan Rice, a terrorist who conspired with Hillary Clinton and Samantha Power to murder forty thousand Libyans. “I love her,” she said, her gaze wandering toward the ceiling, perhaps in reflection of the bemused passivity of the Party faithful. 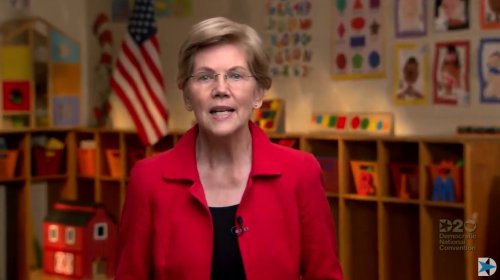 Elizabeth Warren was a schoolteacher from 1970-1971. She hasn’t been a schoolteacher since “A Clockwork Orange” was released. Why did she make her convention speech from this classroom?

The convention is the Party’s final opportunity to pacify their electorate, to discourage them from asking inconvenient questions about a nominee they didn’t desire. They flood the television screen with famous politicians whom the electorate have been instructed to love. Kerry Washington had the unsavory honor of introducing the aforementioned Clinton, who appears to have aged multiple decades in the last four years. Clinton, who conspired to staff the Democratic National Committee with her most unrepentant confederates, voiced an ineffably dishonest complaint about America’s want of “honest elections”, but it is her appearance, more than her unpunished rigging of the 2016 primaries, that is of particular interest to me tonight. The Trump Administration has accomplished all of the iniquitous goals to which the Second Clinton Administration may have aspired, and the Clinton family has profited obscenely through the government’s deliberate mismanagement of the pandemic, but nonetheless, the helmsman in the Oval Office serves as a many-times daily reminder of Hillary Clinton’s historical failure. She will never become President of the United States, never mind the first female American Emperor, and in the absence of that distinction, she may very well be lost to history. She knows this, and she, the peerless egomaniac, spends every conscious minute of the day obsessing over this. She will never know happiness now that her life’s obsessive focus has been thwarted. She will die in intolerable emotional throes, a state of existential suffering much more severe and merciless than the cruelest fate to which the innumerable victims of her imperialist carnage were subjected. If we might partake in inimical schadenfreude—a potion that is poisonous to the soul—if only to commemorate the Party’s demise, then it is this: the arid tears that Hillary Clinton will spill for the undignified remainder of her wasted life.

“Rejoice not when thine enemy falleth; and let not thine heart be glad when he stumbleth: 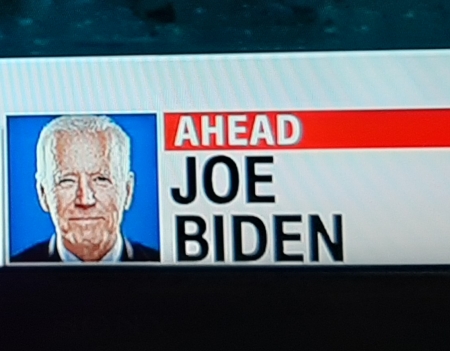 Kind-of looks like the final boss in a game for the original PlayStation. Step up, Trump.

Yes, we may have sipped a bit too greedily tonight. Best we finish up with some commentary on the showcase speech of the third evening’s entertainment—obviously, I’m referring not to Kamala Harris, but to Barack Obama, one of the most globally familiar symbols of American imperialism. Every politician is a kind of Rorschach test, meaning different things, depending on one’s political education; however, Obama is unique in his ability to inspire melancholic disappointment in every honest witness. Clinton will be tormented until the end of her days by her failure to resonate in the historical record, but Obama will be disgraced beyond the grave as a punchline, as the single most conspicuous reason why a malignant imbecile like Trump became the American Emperor. There is only one way for Obama to salvage his legacy; he cannot redeem it, not after all he has done to besmirch it, but he can pull his own name from the sewer if the Party wins this election. Obama is driven only by this self-centered incentive, instead of any altruistic impulse, and it is the same base motivation that puts him and Biden in front of the cameras today.

With that being said, the final question is: how did Biden fare in the convention’s climactic speech? You’ll have to ask someone who witnessed it, for I powered down my television set shortly before he took to the stage. I could watch a recording on YouTube if I wished, but I haven’t for the simple reason that I don’t. You may wonder what, then, was the point of sitting through, of suffering, of surviving this inglorious convention if I didn’t even bother to watch the finale. The point, or mine, was to understand the convention’s central message, to read its tenor, and to learn what it expected or sought from the audience of the electorate. I received all of that information long ago, and quite some time before the grand finale. Biden was never going to change the nature or the substance of the convention, any more than he will change the nature or the substance of the Democratic Party, or the nature or the substance of the American government.

If you disagree, then you are free to vote, just as you are free to witness his speech. Certainly, you won’t be doing anything singularly shameful: in any event, it’s all been done before. 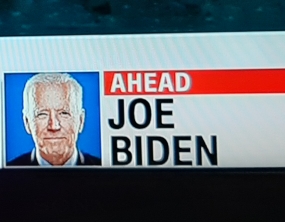