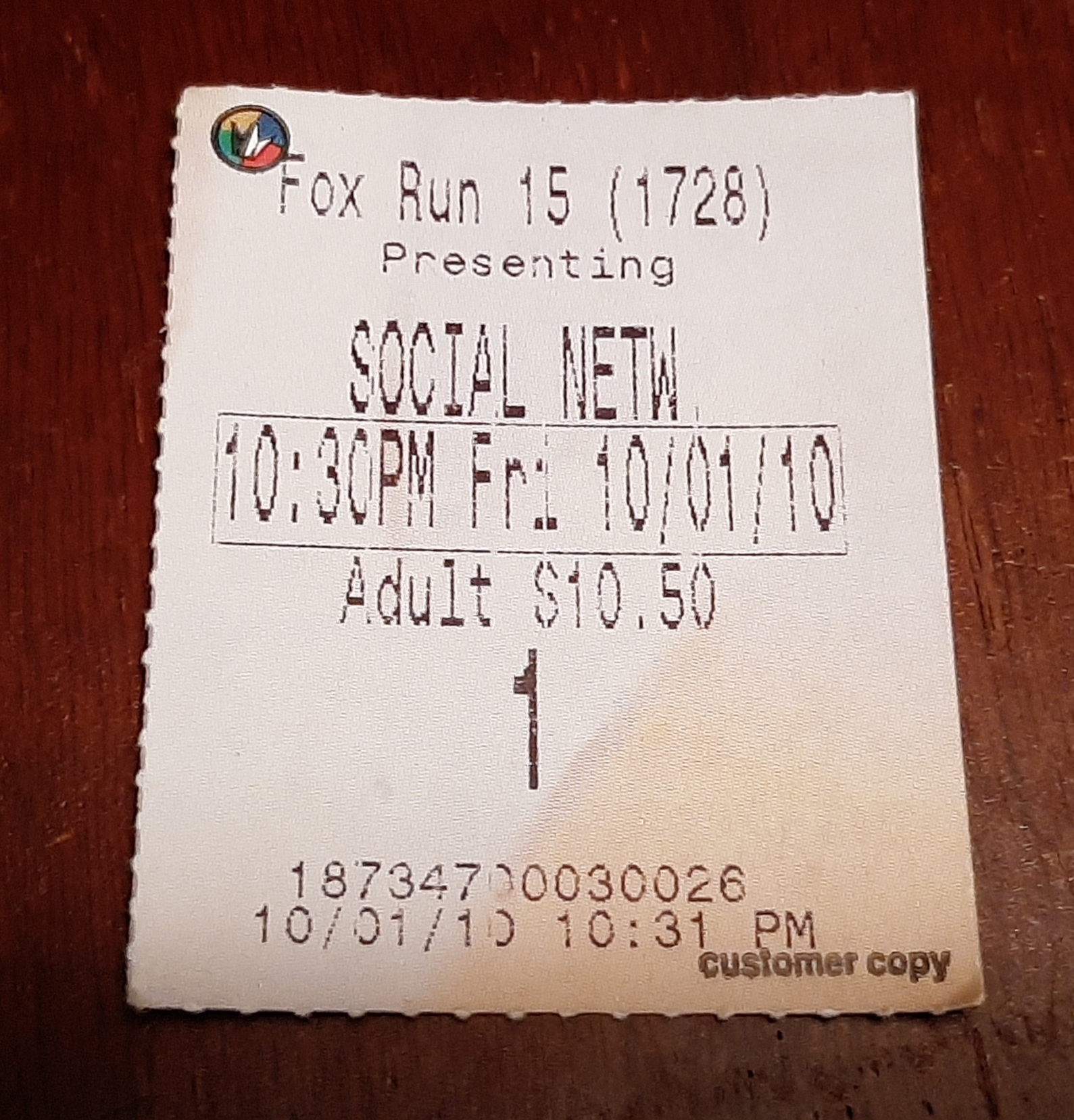 Today is the tenth anniversary of the theatrical release of The Social Network, a movie that reflects the hubris, evanescence, and existential futility of the 2010s, perhaps more vividly and clearly than any other film produced in its wake. Such is not to say that the film articulates or even comprehends this singularly postmodern condition, and it may be anachronistic to suggest that it does: how could any person, even the most prescient intellectual, have foreseen the impending fragmentation of the American psyche in its particulars? Aaron Sorkin, who wrote the screenplay after spending several years producing propaganda for the Democratic Party, certainly understands the relationship of the media and the mind, but even he couldn’t have composed such an immaculate forecast, could he? As a sociological statement, is the movie only a beautiful error, or am I reluctant to acknowledge a more sinister, convoluted purpose?

Perhaps we are getting ahead of ourselves. We should try to remember, as best as we can in these amnesiac times, the atmosphere, mentality, and mood of the autumn of 2010. In that season, I was a recent high school graduate, possessed of a relentless dream of becoming a filmmaker, though I could not find or even imagine the means to realize this ambition. We might politely describe this condition as optimism, which the Americans of those days possessed in abundance: we, the liberal bourgeoisie, were still basking in the dull afterglow of the election of President Obama. We were grateful to have survived George W. Bush, and although we hadn’t been especially afraid of John McCain, we all believed we had dodged some kind of bullet in the elections of 2008. Admittedly, the transition to the nebulous greatness that Obama envisioned was taking longer than we expected, and in our listlessness, we might have developed minor anxiety, but for the most part, we were in good spirits, completely incognizant, if not exactly ignorant, of the impending calamity.

This is neither the time nor the place to attempt a comprehensive interpretation of the Obama years as a desperate exercise in staving off the inevitable collapse of the American Empire, but a palpable sense of insecurity is present in the cultural artifacts of that epoch. While not a fatalistic film, and while even less of a political film, The Social Network perceives the vacuity and hollow core of an immobile American society. Filming almost exclusively in the regal halls of Harvard or the pristine conference suites of law firms, the camera gazes about the set, expansive yet oddly claustrophobic, almost as if to ask: “What’s the point? What does it mean?” The American capitalists have pacified entire generations with the broken promise of ineffable wealth, but the millennials, like Nietzsche’s madman who declared “God is dead”, have weighed the offer and scoffed, “Gold is overrated.” It seems that the violent vacillations of neo-capitalism have inspired a conceptual skepticism of the principles of capitalism itself, a spiritual as well as a substantive critique.

Unfortunately, the millennials have yet to substitute the love of humanity for the love of money. The millennials are known as “the social media generation”, not because of their superficiality or inattentiveness (two characteristics that are seemingly ubiquitous among the baby boomers, also), but because of their demonstrable disbelief in the metaphysical value of human relationships. The millennials would rather have ten thousand followers than a single friend—not because they have learned their moral code from social media, but because they have applied the neo-capitalists’ view of disposability, plasticity, and planned obsolescence to the field of human interaction. What does it matter if I lose a few friends when there are ten thousand more to take their place? In this respect, social media is not the cause of psychopathy but its ironic reflection.

Sean Parker, one of the founders of Napster, appears in The Social Network as the embodiment of that sociopathic tendency, one which seeks to be veiled, even exonerated, in the digital landscape. Parker is depicted as a washed-up womanizer who is rapidly approaching poverty and irrelevance, which, in the imaginary world of social media, are sometimes synonymous. He represents the neo-capitalist system in decline, scarcely capable of masking its own dishonesty, and strangely prone to the annihilation of personal bonds. After forcing his way into Facebook, the film’s eponymous corporation, he causes just enough trouble to jeopardize the billions of dollars he stands to make, and then he exits the story as abruptly and pointlessly as he entered. Not unlike the inexhaustible wealth that has come to define American life, the bloodlust and sadism that are required to generate that kind of money lack any coherent motivation. Perhaps it is the recognition of this fundamental emptiness, rather than a guilty contemplation of its brutal consequences, that explains the cultural downfall of the United States.

The greatest failure of The Social Network is the absence of a humanizing element. The characters who populate the story are not people struggling to reconcile their ambitions with their emotions, but manifestations of assiduous industrialism who differ from each other only in the tone of their ripostes. Seemingly every line of dialogue in this script is either an insult, a rebuttal, or a counter-rebuttal, as if it were a competition in which the audience is keeping score. While this would have served a satire well, a parodic portrait in the vein of Oscar Wilde, the screenwriter and the director insist on an ominous tone that they simply haven’t earned. For those outside the know, the director is David Fincher, who previously delivered Fight Club to an undeserving audience in 1999. It is a delight and a relief to watch Fight Club, a film with such reserved and unpretentious philosophical connotations, in this pedantic day, but it also raises baffling questions about how such a disciplined man could go on to direct a thematically hasty film such as this.

History will not remember that, when The Social Network was released in the autumn of 2010, the public questioned the haste with which the film was produced. “Why,” the public asked, “are these filmmakers rushing to tell a story about the creation of Facebook? Facebook debuted less than six years ago. Shouldn’t they wait until the website is older?” What the public could not have known is that, ten years later, the nature of the project is almost too absurd to be taken seriously—not for the lack of intellectual intrigue inherent in the history of Facebook, but for the reverence wherewith the public and the filmmakers approached the website. It’s a website, a single fragment of media, not an entire medium, much less a cultural bedrock. It’s simple for us to recognize that today, ten years removed from the release of The Social Network, in a time when Facebook has been sharply reduced in popular relevance, but a decade ago, people still believed in the durability of electronic phenomena. If I have yet to sufficiently illustrate the point, consider that 10/01/2010 was the date on which The Social Network was released to theaters, not to streaming services, and you may see where I am going with this.

The latest date on which The Social Network could have been released was June 4th, 2013, one day before The Guardian began to publish Edward Snowden’s grim evidence of the National Security Administration’s domestic surveillance programs. The corporate media framed Facebook’s active participation in these schemes as a betrayal of its hundreds of millions of members, but did any of them really have a right to claim surprise? Seven months after the release of The Social Network, but two years before Snowden fled to Hong Kong, Julian Assange condemned Facebook as “the most appalling spying machine that has ever been invented … The world’s most comprehensive database about people, their relationships, their names, their addresses, their locations, their communications with each other, their relatives, all sitting within the United States, all accessible to U.S. intelligence.” With each passing year, it is becoming increasingly difficult, if not outright impossible, to sympathize with the American people for their assiduous obliviousness, not strictly in respect to the national intelligence apparatus, but to the innumerable abuses committed by their government.

In the absence of proof, we cannot accuse Sorkin of deliberately excluding this subject matter from the screenplay, but should we question his failure to consider it? Should we condemn his uncritical depiction of Bill Gates and Peter Thiel? And isn’t it interesting how Parker goes out of his way to mention Leslie Wexner? Perhaps it’s inappropriate to raise these questions in light of the thematic material with which the film does contend, but then again, we are living out a culture that this film has shaped, however imperceptibly or inadvertently. We cannot watch this film without recalling our own ignorance, relative or otherwise, in the autumn of 2010. We cannot watch this film without thinking about how all of these factors sailed over our heads and passed us by, sometimes because of our voluntary ignorance, at other times because we were prisoners of circumstance. That is why we have to revisit a film like this, a film that, at first glance, appears to be antiquated well beyond the point of merit. We revisit it in the hope, even if it be a desperate and delusional hope, that we do not return, in the year 2030, to a film released in the year 2020 and ask ourselves, “How could we have known so little? How could we have been so oblivious?”

I often ask this question of myself, thinking back to that crisp October night when my friend and I travelled out to the theater to see The Social Network. It was 10:30 PM, the last showing of opening day, and I don’t recall there being too many other people in the auditorium. Nowadays, the theaters are hollowed out and haunted, devastated by the hubris of the Hollywood elite and finally reduced to an impractical niche by the government’s response to the coronavirus. The cinemas that are still in operation close their doors long before ten-thirty, and they no longer know the magic of opening day. The films I once saw myself directing will never play on the screens of the Fox Run 15 or the Spinelli Cinemas 4. Instead of working under the auspices of Harvey Weinstein, I went on to read radical literature and become a writer somewhere on the outskirts of the Internet. Still, I’ve learned to appreciate my lot: I’d rather be Dack Rouleau than Mark Zuckerberg.